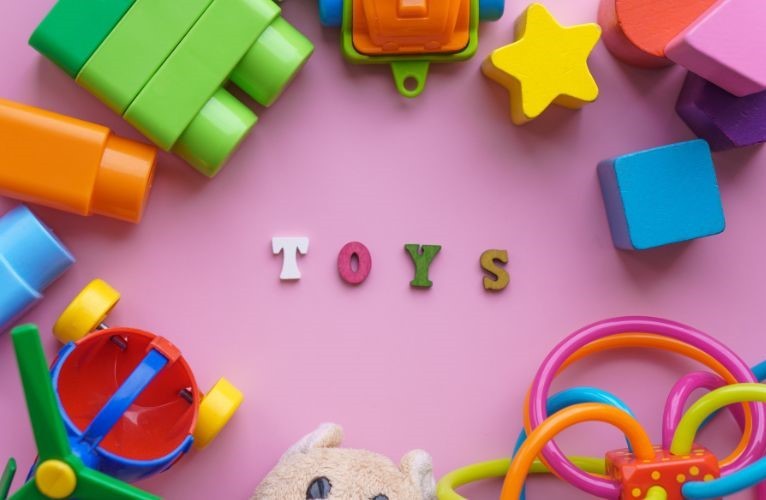 So, what colors do newborns perceive when they are three months old? Babies can see all primary colors, but they may be able to discern other tints.

For the first few months, bright, vivid colors at opposite extremes of the spectrum will be easier for the baby to see.

Look for high-contrast printing in intense colors when selecting visual materials such as toys and books for your young babies. Contrasting colors include red and green, blue and orange, and purple and yellow. Bright colors on white backgrounds can work nicely, also.

Because black and white are opposing extremities of the color spectrum, they are a fantastic choice for newborn babies and capture their attention better than products with more subtle hues.

When Do Babies See Color?

When do babies first see colors? What colors do newborns notice first? These are the usual inquiries from inquisitive mothers.

The baby’s color vision isn’t as sharp as an adult’s, but it’s still good enough. It is widely assumed that babies have good color vision by the age of five months.

Newborns are said to see in black and white, with some hues of gray. They don’t start seeing color until they’re roughly four months old. A recent study has called into question a widely held belief about newborn eyesight. According to some studies, newborns can see big swaths of red.

They may be able to distinguish between reds and greens as early as eight weeks. However, testing it is a challenging task. Scientists agree that, in the early stages, the brighter the hue, the more probable the baby will be able to see it.

Meanwhile, seeing and differentiating between colors develops with time, like the rest of newborn vision. Scientists believe that by four to six months, babies will be able to identify colors in the same five groups as adults: red, yellow, green, blue, and purple.

So the answer to the question, “When does a newborn see color?” is most likely from birth. However, some study is currently being conducted to verify the actual colors newborns can see.

Do Babies Only See Black and White?

Babies can distinguish between light and dark, so books or artworks with contrasting black-and-white imagery may appeal to young newborns. However, contrary to widespread assumption, newborn babies do not simply see in black and white.

Although babies can see colors, their brains may not perceive them as clearly or vividly as older babies and adults. Red is the first primary hue your newborn sees when they are a few weeks old.

Look for high-contrast printing in intense colors when selecting visual materials, toys, and books for your youngster. Because black and white are opposing ends of the color spectrum, they are a fantastic choice for newborn babies and assist their attention better than products with more subtle hues.

How Long Do Babies Only See in Black and White?

Your newborn’s vision could be much more innovative than we assume. It’s not true that babies see in black and white exclusively, but their development changes rapidly while they grow. It is widely accepted that their eyes have developed where they can see colors by four months.

If you’re worried that it’s not, then a doctor will be able to help you out. If your infant does not concentrate on things, or their eyes do not seem to interact, it is advised to bring your newborn to a doctor immediately.

When Do Babies Start Seeing Color?

Baby eye color development starts between two and four months. As they age, they begin to see more colors. At birth, babies can distinguish between shades of green and red. However, the exact timing for when your kid will see these colors varies by individual; there is no specific week or month when it occurs for all babies globally.

Encourage your baby’s development by providing brightly colored toys and books. Your baby may prefer vivid primary or rainbow colors — red, orange, green, blue, and so on — to more muted tones.

When Do Babies See Clearly in a Full Range of Colors?

Babies can see most colors at five months of age.

They still don’t perceive colors as vividly as adults since other essential aspects of vision are maturing simultaneously.

Other Visual Skills being Developed:

Depth perception, or a three-dimensional picture of the world, emerges between five and eight months. This skill assists your newborn in identifying edges and drops and determines which of the two items is closer.

For example, a newborn with a three-dimensional vision of his environment will usually stop crawling close to a dangerous edge, like the edge of a flight of stairs. You, as a parent, will have your hands full with constant surveillance. They might stop crawling at the top of the stairs but lacks the agility and skill to descend the steps safely.

You should allow a newborn aged five to eight months plenty of opportunities to explore and play on the floor. As they crawl to objects at various distances, depth perception improves. You can also hang mobile or other items across the crib, and this assists your newborn in judging distances and fine-tuning depth perception when she reaches for objects.

Hand-eye coordination develops as the baby begins to track moving things with their eyes and grasp for them. By eight weeks, newborns may more easily focus their gaze on the faces of their parents or other people nearby.

During the baby’s first few months, eyes begin to operate together, and eyesight develops fast.

A newborn baby does not care if his hands are his own; he considers them other items around him. Babies view seeing and touching as different activities until they are roughly six months old. It takes some time for babies to realize they can use their eyes to direct and their hands to complete a particular activity.

This discovery is made by newborn neonates when they begin to associate motion and sounds with hand movement. However, developing hand-eye coordination is a significant milestone in the first year of life since it allows your baby to explore the world thoroughly.

The Importance of Hand-eye Coordination 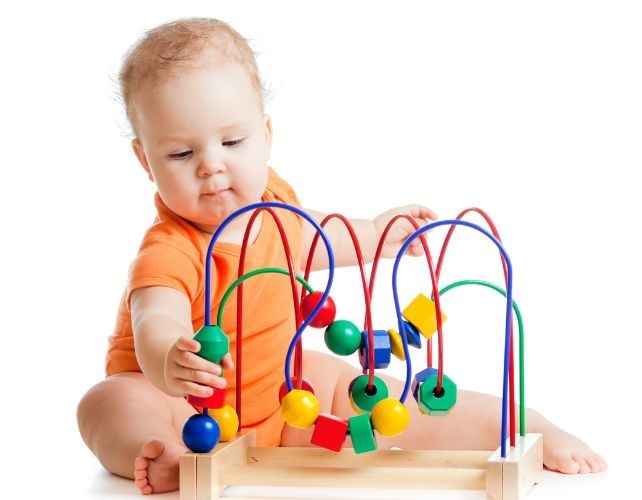 Hand-eye coordination is the vision’s capacity to synchronize correctly with the hands. The information your eyes perceive is accurately conveyed to your hands to do a given or assigned task, such as catching a ball or writing. Correct eye attention and precise hand execution result in good hand-eye synchronization, which is critical for carrying out daily tasks correctly.

Good hand-eye coordination is essential for executing numerous everyday functions, such as writing and eating. Newborns can grasp anything within their small hands’ reach, which appears to be a genetic trait.

Given the significance of hand-eye coordination movement, it is critical to discover how to foster the development of these essential skills in newborns.

Babies begin to learn control of their movements between the ages of one and four; this starts with reaching, gripping, and pointing, eventually developing to more significant milestones such as crawling and walking. Parents argue that exercising motor skills with your newborn will increase hand-eye coordination and strength. Here are some ideas.

☞ Place a mobile over the crib

Begin by hanging a mobile over your baby’s cot to encourage hand-eye coordination. Your infant will reach out and attempt to touch the object between three and four months. When your youngster can grab the things, remove the mobile and begin a new activity.

Scientists recommend engaging your baby in play at around four months by shaking plastic keys within reach. Your baby will try to grab the keys as they move.

Hold favorite toys whenever your baby can sit in your lap, as this will teach your baby to concentrate in a new position.

It takes more skill to concentrate on and pick up small items. When your baby is about five months old, practice with more minor things — but nothing small enough to pose a choking hazard.

☞ Have fun with Rattles

Rattles are an excellent approach to teaching coordination and cause and effect since your baby will understand that shaking the rattle makes the sounds.

☞ Make a Variety of Toys

Your baby will begin to gain the ability to manipulate objects between the ages of nine and twelve months. Introduce a range of exciting things with moving parts to your baby’s playbox at this time. Allow your baby to practice hand-eye coordination skills by opening doors, spinning wheels, and pushing digits on a keypad.

Vision impairment is described as the loss of the ability to see objects. It paralyzes you and makes doing regular daily activities difficult. Visual acuity loss is a significant cause of visual impairment. When things appear blurry and eyesight acuity is gone. A baby with vision impairment struggles with hand-eye coordination and has emotional, cognitive, neurological, and physical development issues.

Movement disorders are characterized by impaired or disordered body motions. Ataxia, defined by a loss of coordination while performing voluntary activities, is one example of this disability. Clumsiness, instability, and inaccuracy are symptoms of movement disorders. The movements appear choppy rather than smooth.

It is a type of vision in which an animal uses both eyes to perceive a single three-dimensional view of its environment.

A baby’s eyes should be operating together by four months. Babies begin to develop depth awareness (binocular vision) at this age.

At birth, a newborn’s vision is roughly 20/200, and they only notice strong contrast and outlines of people and objects; this explains why babies are drawn to black and white and highly patterned things. As the baby’s vision develops, they can see things more clearly and start seeing colors. The improvement in eyesight is due to binocular vision, which is a brain-programmed automatic mechanism.

You can relax if your baby is under six months old and you’ve noticed that their eyes are occasionally crossed. Most babies do not utilize both eyes together until they are about six months old. Because the brain has not yet been programmed for binocular vision, it is normal for a baby to have one eye that moves off to the side or turns inward intermittently until six months. Around this age, the brain trains the eyes to work together, and baby eyesight improves considerably. 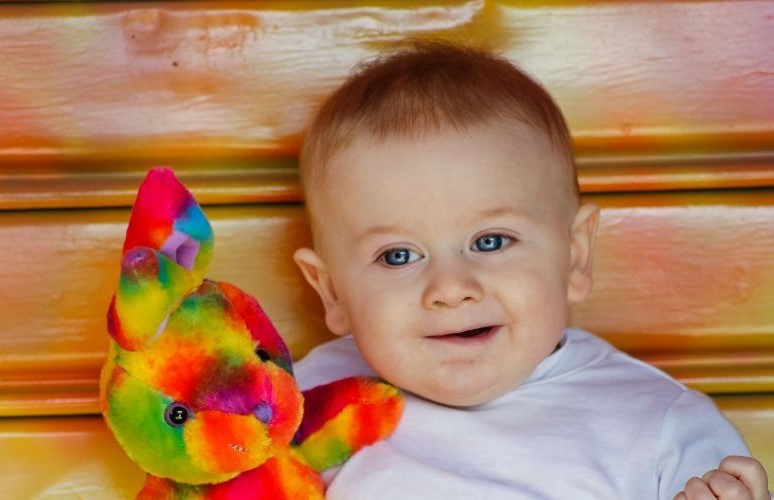 If you worry about your baby’s eyesight or ability to see color, consult with their pediatrician.

Make an eye doctor appointment if your baby has any of the following conditions:

If your baby is still “cross-eyed” (the left and right eyes appear to be staring in opposite directions) at three to four months, this could be a symptom of a visual or eye muscle problem during your next checkup.

The doctor can assist you in comprehending the various vision milestones and determine whether or not your baby is on track.

It’s a vibrant world out there, and your kid is taking in more of it with each passing day. Practice naming the things and colors in your baby’s environment as they grow to help them improve their vocabulary and word association.

Colorful toys include blocks, crayons, puzzles, rainbow stackers, and anything else where each color is represented on a distinct piece or portion.