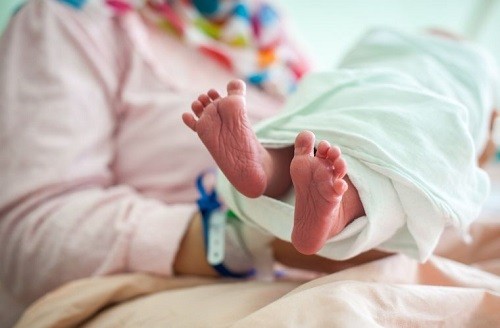 Most of the time, a baby’s shaking isn’t dangerous, and they’ll grow out of it. That doesn’t mean babies have never had seizures, so it’s essential to know when to worry.

You look over and see that your baby’s leg (or other body parts) is shaking. That’s a strange thing for a parent to see. Most of us would probably think it’s some kind of seizure, but it’s just a harmless cause of the shaking.

There are many causes of newborn leg shaking. The most frequent reason is that a baby’s nervous system is still growing, and they have not yet developed a habit of controlling their muscles. Usually, this fades away on its own after a few weeks or months.

Why is My Newborn’s Leg Shaking?

Your newborn’s leg might shake for several reasons. The Moro reflex, often known as the startle response, may occur in your newborn, and newborns frequently experience this reaction, which usually goes away on its own within a few months.

Another option is that your baby is jittery. This uncontrollable shaking can be brought on by various conditions, such as low blood sugar, an illness, or drug withdrawal. Once the underlying reason is addressed, jitteriness typically dissipates.

A more serious problem, including cerebral palsy or a seizure disorder, could be present if your newborn’s leg shaking is severe or continuous. Although newborn leg shaking is typically nothing to worry about, consult your pediatrician if you have any concerns.

The Nervous System is Reacting

The brain in your baby controls how the body functions, including when to feed and react to outside stimuli. Your child’s neurological system may still develop, but if the brain instructs a particular limb to move, it could cause an innocent twitch or shake.

The nervous system is getting ready to go on the field here. Your baby’s nervous system will eventually develop, and the brain-to-limb link will take place without shaking.

Your baby will likely carry on engaging as usual without even realizing what’s happening.

Mucous Myoclonus is a movement problem linked to sleep that affects newborns.
Large muscles, including the arms, legs, and torso, twitch rapidly and repeatedly as you sleep, which is one of the disorder’s symptoms. This condition is characterized by basic, repetitive movements that do not seem goal-directed, in contrast to sleepwalking or other diseases that entail training while asleep.

A medical term known as myoclonus is used to describe sudden, uncontrollable movements. Myoclonus can also manifest as hiccoughs and hypnic jerks.

What causes benign newborn sleep myoclonus is unknown to researchers. According to experts’ theories, the motions might occur when a newborn’s spinal cord’s protective sheath is still forming. This circumstance may cause the body to react to impulses it usually wouldn’t.

Occasionally, benign newborn sleep myoclonus runs in families. Myoclonic jerks in newborns with the condition may be brought on by monotonous noises or rocking.

Although newborns born to women who do not use drugs experience the majority of benign neonatal sleep myoclonus episodes, the illness is common in newborns of mothers who are addicted to opioids.

There is no need for therapy because benign newborns sleep myoclonus unharmful, and the condition typically goes away on its own. It may make symptoms worse to try to restrain the baby’s legs or give anticonvulsant medication. Caregivers may close the area around the newborn to prevent harm to themselves from their movements.

Even though physicians do not think benign neonatal sleep myoclonus is hazardous, it is simple to mistake this condition for others that need to be treated, such as epilepsy. Parents should consult their pediatrician to rule out other diseases if they notice seizure-like movements in their newborns or if their babies were born to moms addicted to opioids. 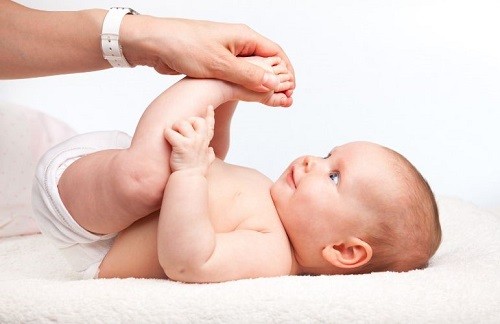 Moro Reflex occurs when newborns react unexpectedly by stretching their arms or legs. It happens when your newborn is surprised by outside factors. When Moro happens to them, they are completely alert; it is not something they do deliberately.

Newborns will outgrow Moro as their reflexes become more controlled. Until then, you may notice your baby arching its back for a few seconds, spreading its hands and fingers, and reaching out as far as its arms and legs allow.

After performing this, the newborn appears slightly scared and in need of a hug. As a new parent, you should not be concerned about this occurrence, which occurs most frequently between three and six months of age.

This reflex is purposefully designed to protect newborns as they adjust to a new environment outside the mother’s womb. The Moro reaction disappears around the age of four to five months.

Getting A Diaper Changed

There are many new things to understand when you get to be a parent for the first time. Finding a solution to change a baby’s diaper is vital, especially changing a baby’s diaper without making it shake its legs in protest. Here are some suggestions to avoid leg shaking while changing a diaper.

Your Baby is Ready to Eat

Your newborn may show signs of hunger if they start to shake their legs a lot out of the blue. Newborns sometimes move their legs while they are awake, but usually not as much.

Newborns can also release gas by shaking their legs. Try burping or massaging your newborn’s stomach if they are twisting their legs and seeming uncomfortable.

Soon after birth, it’s typical for a baby to shake its legs, which indicates that the newborn is prepared to begin solid meal feedings. We’ll talk about the causes of neonates’ leg shaking in this post, along with some suggestions for how to stop it. We’ll also offer some pointers on successfully and securely introducing solid foods to your newborn.

Newborns learn to shake their legs as a reflex to assist them in the beginning to crawl. When babies first exhibit interest in solid foods, this reflex typically begins to develop simultaneously. After a few weeks, this reflex usually stops on its own, but you can help your newborn stop shaking its legs by giving them solid meals they can consume.

If you’re confused about how to give solid foods to your baby, you must approach cautiously. As your infant becomes accustomed to eating solid foods, gradually increase the amount of food you give them. Additionally, it’s crucial to ensure the food you give them is tender and straightforward to chew. Start by feeding them pureed fruits, veggies, or baby food for young children.

You could try a few methods to stop your newborn from shaking their legs after you start feeding them solid foods. You might try offering them a pacifier or other chewable item to help calm them down. You can also try massaging their legs or giving them a warm bath to support their muscles.

After trying these suggestions, you must consult your doctor if your child’s legs are still shaking. They might be able to advise you correctly or propose a course of therapy. However, leg shaking is often a mild reaction that disappears by itself within a few weeks. Therefore, try not to worry too much while enjoying your child’s development.

Causes for Concern When Your Baby Shakes

Every parent’s biggest dread is a seizure. When mothers see their newborns fall or knock their heads, they take a deep breath and hold it until their baby starts crying or gets up. Even while babies may be fine suffering a seizure once or twice, if seizures and spasms occur frequently, the body will suffer long-term consequences.

These symptoms point to an underdeveloped neural system, which is common in infants. It’s also known as myoclonus, rapid twitching of muscle fibers. A quivering chin or lip was occasionally visible.

According to some specialists, this could be related to elevated amounts of norepinephrine, a nerve system hormone. While all babies twitch occasionally, premature babies twitch more frequently.

Here is a list of common causes for your baby shaking:

☞ It’s due to newborn reflexes

Do your babies experience jitters after being frightened by a loud noise?

The Moro reflex, or the startle reflex, is another name. It elicits sudden, loud stimuli such as bright lights and loud noises. Typically, a newborn would extend their arms and legs for a few seconds, arching the back slightly.

This reaction is purposefully designed to protect neonates while they acclimate to a new environment outside the mother’s womb. The Moro reaction disappears around the age of four to five months.

☞ It’s your coffee (and cigarette) use

Are you currently breastfeeding but incorporating coffee into your diet?

The caffeine in your system can be passed on to your child through breast milk. Because babies cannot metabolize caffeine as quickly as adults, it remains in their system for much longer, increasing the risk of adverse effects.

☞ It could also be colic

Infant colic typically affects children from around three weeks to four months. Colic symptoms include flailing arms or legs, an arched back, and legs folded up to the abdomen.

A parent may mistake this movement for shaking or tremors. Don’t worry; colic is not a disease in and of itself, and it will pass on its own.

☞ Mothers with substance use

While pregnant, mothers who use certain drugs or substances (such as alcohol, marijuana, or tobacco) expose their babies to these substances or chemicals.

The child’s supply of these hazardous compounds is quickly cut off after birth, as the umbilical cord is severed. As a result, withdrawal symptoms such as jitteriness may occur.

☞ Your child’s blood sugar levels may be low 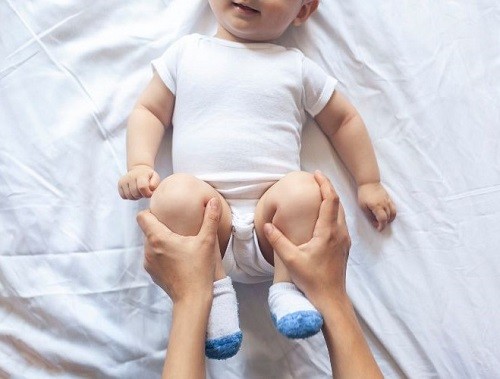 If you fail to respond to your child’s hunger cues, they may experience tremors or trembling due to low blood sugar levels, known as hypoglycemia.

In newborns, crying and jitteriness are late indicators of hunger. Please don’t wait for your kid to be so hungry that they shake repeatedly only to get your attention.

☞ Make sure to rule out a seizure episode

This is undoubtedly at the top of the list for most parents. Seizures in infants are extremely infrequent (and extremely difficult to identify! ), but they can occur.

Sucking movements of the mouth and frequent eye blinking are accompanying symptoms. If your infant appears to be jerking, try restricting that limb or activating the Moro reflex by making a loud noise (like a clap), etc. or a bell) – if the jerking persists, have your child examined quickly for a complete medical assessment.

The majority of your baby’s shaking will be short-lived and harmless. Babies experience a range of ages, stages, and bodily changes.

Connecting with other parents who have also experienced this will help you understand the majority of babies who shake, twitch, or jerk at random.

A pediatrician should be consulted about your baby’s newfound shaking if you have any concerns or if it occurs frequently.

Don’t forget to look out for seizure signs. You might also establish a journal for your baby’s trembling, mainly if it occurs frequently. If necessary, your child’s pediatrician might also find this helpful.

To better identify the cause and provide your infant with the best care possible during the episodes, keep calm and reflect on the research you’ve done here.

There is a lot of help available for new parents going through novel experiences with their infants. After all, there isn’t a manual that explains everything your child goes through or why.

Most shaking a newborn experiences in their legs and limbs or as a result of spontaneous reactions will eventually pass as their nervous system matures.